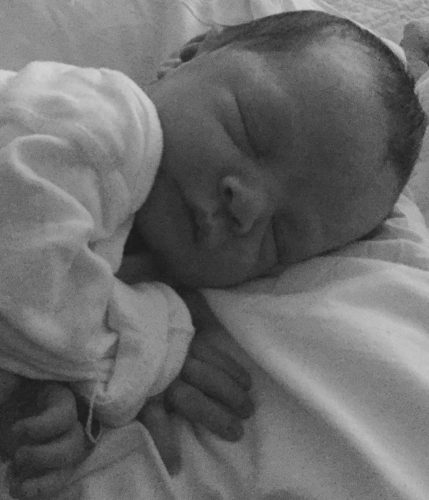 Six months and 8 days later…Am I finally out of the baby bubble? Not quite, but while Sky Tara is napping and the husband is out-of-town, with a quiet house, I felt it was time to get back to my story.

As I mentioned in my last post (I know it’s been months, sorry) there is so very much to say about this experience.

I’ll jump back to the days just before I gave birth.  I had waited so very long to become pregnant that everyday I would just look at my body in awe. I was REALLY pregnant – something I had fantasized about for so many years. I remember walking past maternity stores and feeling depressed that I would never go shopping in one. Ever. I had even kept some oversized shirts in my closet for years in a back corner for when I got pregnant. That corner sadly got cleared out over ten years ago.

Our due date was November 12th – of course my husband and I were hoping for November 11th so her birthday would be 11/11/15 – just thought it would be cool.   My OB told us that the baby wasn’t growing any longer and it would be best to get her out asap. Better for her and for me. So on October 31st, Halloween Day, we went to his office for what is called a cervical sweep that often can put one into labor. I was determined that I was going to do this naturally.  Absolutely no drugs unless this was a life or death situation.

It was late in the day and the West Hollywood Halloween Parade was setting up. We could hear the sparklers and fireworks and yells as the excitement heated up. Doc said to go home because nothing would happen (if at all) for 24-48 hours. I made him swear that I would not have a Halloween baby. We selfishly didn’t want to share her birthday with any other occasion!

The plan was that the next day we were going out for eggplant parmesan which according to old wives tales can induce labor. Best laid plans…

Around 8:00pm on Halloween night we went for sushi – well my husband did, I had baked fish. Then I started having mild cramps. I thought I was probably just sore from the procedure. We went home and I got ready for bed. I was exhausted. Even with the cramps, we both fell asleep.

A few hours later, it began.

In my next post I will share the story of how I went through labor, naturally, at age 53…in the meantime I have had the most wonderful first Mother’s Day…texts, emails, phone calls near and far to honor me on this most special day that I never thought I would see. Grateful is an understatement…

11 thoughts on “My First Mother’s Day”

This site uses Akismet to reduce spam. Learn how your comment data is processed.